A selection of our past cases…

The case of the daring comic strip 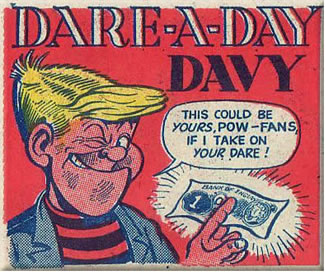 We love it when you ask for really specific things, the more details the better – it avoids awkward questions like “Are you sure absolutely, positively certain that chocolate teapots actually exist?”

Our lady client told The Thing Detectives that she had starred in the comic strip on the back page. The strip “Dare-a-day Davy” featured a school boy who took up dares sent in by lucky readers for the reward of £1.

Throughout the limited run of POW! (1967-8), Davy was dared to clean a crocodile’s teeth, wrestle a gorilla and steal the hands off Big Ben’s clock.

As a young lady, all our client had asked of Davy was to simply say “Boo” in a library, earning herself the nickname “Soppy little Dewsbury drop” and a marriage proposal from Davy himself! (Despite this relatively tame dare, Davy still manages to get shot! – see strip below).

The strip was the work of prolific artist and writer Ken Reid, who also drew Roger the Dodger and Jonah for the Beano, together with Fudge the Elf, Bing-Bang Benny, Angel Face and many other, slightly mischievous, characters. One Dare-a-Day Davy strip, in which Davy attempts to resurrect Frankenstein’s monster, was banned from release for fear it was too gruesome! You be the judge, see the link below.

After a few weeks spent contacting comic book sources, we were able to send a hi-resolution scan of the strip from POW! #35 (see below) on to our client. She said “that’s fantastic, how exciting to be taken back to 1967!” and made a nice donation for our services.

Do you have any blasts-from-the-past that you would like us to find? Just ask!

The strange case of the magician’s postcard 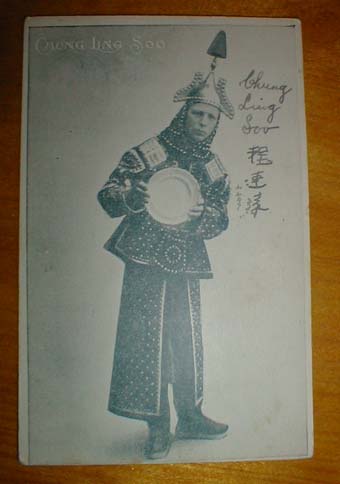 A client in Canada wanted us to find Ephemera (paper collectibles) to do with “the great” Victorian magicians.

Alongside The Great Lafayette who was buried with his dog, and The Great Hermann who developed card throwing into a martial art, Chung Ling Soo was a very interesting magician indeed…

Read the full story on our blog.

The Goldie Hawn on a spinning wheel debacle 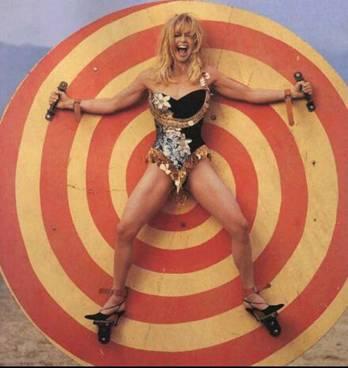 Nothing beats the sight of an A-list celebrity pinned to a circus wheel, except perhaps being the proud owner of the original photo.

We tracked down this unique photo of Goldie Hawn for one of our clients, which was published in Rolling Stone magazine in 2001.

Show your appreciation by making a donation. Click the button below to make a secure payment via PayPal.